Renée Fleming was dazzling in Capriccio at the Met

April 07, 2011
My plane from Chicago was running late, and I thought I might have to drag my suitcase from La Guardia to Lincoln Centre! Luckily the tailwind helped the plane catch up. So I got to the Met in good time for Capriccio. 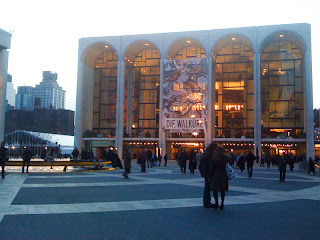 It was the 9th performance of Strauss's last opera Capriccio at The Met. I was surprised - I thought it would have been performed more often. The opera didn't get off to a good start. The sextet overture was scrappy and the phrasing was not entirely logical - it sounded like those playing in it didn't rehearse enough. And there were some excruciating moments. Never mind. Joseph Kaiser was Flamand the composer who looked and sang wonderfully at the opening. Russell Braun was Olivier the poet whose more mellow tone reflected the role well. Peter Rose sang the role of La Roche with depth and compassion - especially his rant which was superb. The star of the show, Renée Fleming, was superb - she delivered playfulness and class throughout, culminating in the introspective and imaginative monologue at the end (the orchestra redeemed itself with the lyrical Moonlight Music). Sir Andrew Davis conducted - and apart from the overture it was fluid and tight at the same time.