October 04, 2014
I saw Il barbiere di Siviglia within the space of a fortnight. And for me it was really interesting to compare and contrast.

The set design: Joan Guillén (Liceu) used big props to dwarf the performers thus creating a comic effect on stage. Christian Fenouillat (Royal Opera) used a tilting sound box to thrust the performers forward, thus leaving the singers to deliver the comic drama. I think the latter work better - as the focus remain on the people, rather than the set. 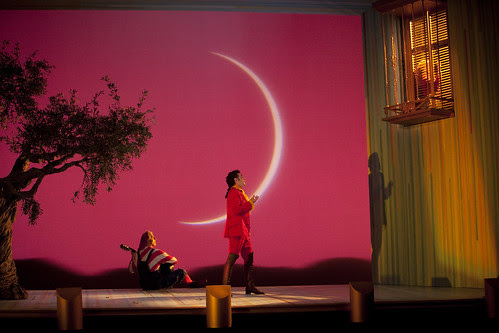 Set for Act One Scene One, Royal Opera

The direction: Direction from Patrice Caurier (Royal Opera) was superb - the interplay of the comic characters was wonderful. Joan Font's (Liceu) approach was more straightjacket comedy - though one cannot help there was over reliance on the super-sized props.

The singers: Annalisa Stroppa as Rosina came up top at Liceu with strong acting and an agile voice while Mario Cassi was a passable Figaro: the rest of the cast was ok but not memorable. Michele Angelini as Lindoro / Almaviva (Royal Opera) delivered some pretty good vocal pyrotechnic while Serena Malfi's role as Rosina was playful, feisty and dramatic.

The conductor: Giuseppe Finzi (Liceu) maintained the momentum but there were times when I thought the singers were taking the lead and he merely followed. Sir Mark Elder was at ease in the Covent Garden pit keeping the orchestral playing light (the lack of vibrato in the upper strings during the overture revealed some maltuning) and agile.

Overall? It's good to experience a familiar work in an unfamiliar house, just to see how others do it. But I have to say the Royal Opera's current production wins on so many levels.