February 14, 2011
There are times when one wants certainty when eating out - such as a light fritto misto at Polpo, or beautiful pied du cuchon at Koffmann's. But there are times when one wants to be surprised. If it's the latter that you are after, then try Hibiscus of Regent Street. Rather than choosing from an a la carte menu, or a tasting menu, the diners have to select whether they wish to eat 4, 6 or 8 courses. The dishes that could appear on your table are listed - that's right you wouldn't know for certain which dish will turn up. 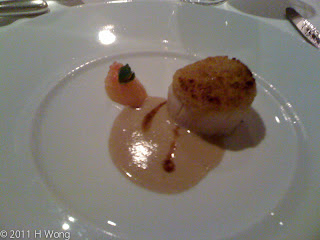 So here is a scallop with crumble on top. They were the huge and hand-dived from Scotland. The crust on top added interest but did not detract from the taste of the sea that the scallop offered. Another dish that came was pan-seared smoked duck breast (see below). It was cooked just right with beetroot garnish and spices. It was tender and flavourful. 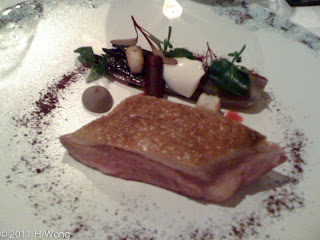 The portions were (too) generous, the service was good, the wine list was interesting, and the ambiance was just right. So go there and be surprised.