April 23, 2012
After Hill Country in New York, I just needed to check out similar places in Boston. Well, Blue Ribbon was nearby so I thought it's worth a try. Clearly, BBQ meat eateries are not places you linger ... 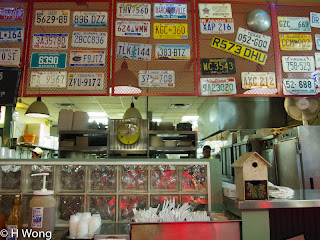 The place was somewhat functional. The number plates (including a UK one) were an interesting. Chairs were hard. Metal top tables were utilitarian. But let's focus on the meat.
A big slab. The ribs were meaty, had a good bite and taste. The magic appeared to be how flavouring were rubbed into the meat and how everything was slow cooked. The BBQ sauce had a wholesome feel - in fact there were big tubs with a push dispenser: one could mix spicy with sweet to one's taste. The cornbread was ok. But this time there was no brisket. Still, it tasted finger linking good.