Lessons in Love and Violence, the Royal Opera

May 10, 2018
It's always special attending a world premiere. Nobody knew what the work sounded like. No "opinions". So there I was watching George Benjamin's Lessons in Love and Violence. This was a re-telling of Edward II's story drawing heavily on Christopher Marlowe's play about this monarch. From the first bar we entered into George Benjamin's immersive, intriguing and intimate sound world. Martin Crimp text was crisp and jagged, and beautifully set by Benjamin - loved the overlapping speech rhythm. Stéphane Degout delivered an intense and troubled King. Gyula Orendt's Gaverston and Peter Hoare's Mortimer were well matched. 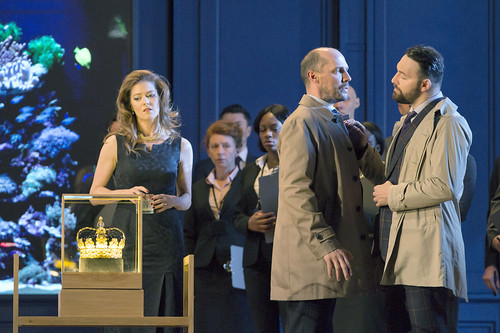 As Benjamin himself conducted, I guessed that's how he wanted the work to sound. I'd need to see it again to hear everything properly (as I found watching Written On Skin second time round more rewarding). Then again, what do I know about 21st Century operas?